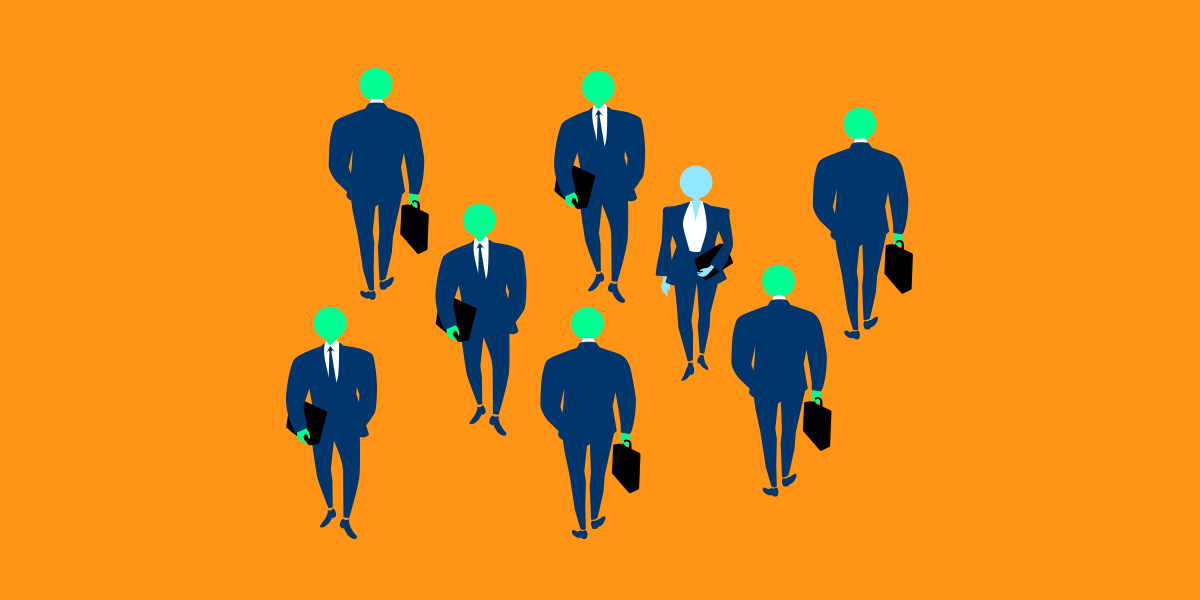 “You’re so good with customers, you’d be perfect leading our customer success team!”

While this comment from executive leadership sounded like a compliment at first glance, I had heard it enough times in my career to be wary. All too often, I’ve seen high-performing women shepherded into client success or account management roles, as opposed to outward-facing sales and business development roles — where the compensation and recognition can outpace more internal-facing roles.

Despite significant strides in workplace equality, this myth of men as client-hunters and women as client-caretakers persists in many businesses. This bias, conscious or unconscious, shows up in the numbers. Women hold only one-third of B2B sales roles according to the Bureau of Labor Statistics, despite representing 47% of business majors with bachelor’s degrees.

This persistent inequality hurts the bottom line. A 2019 study by Xactly showed that women-led sales teams have a higher win and quota attainment rate compared to male-led teams, and a Hubspot study of more than 30,000 B2B sales calls showed that women have an 11% higher close rate than their male peers.

So despite these clear successes, why does the “hunter/gatherer” myth persist? And more importantly, what can be done to solve it?

Leadership Matters
When it comes to representation in the sales, the leaders at the top make a big impact. The Xactly Insights study showed that teams led by men have a ratio of three men to one woman sales reps, while teams led by women have a balanced gender ratio.

But instead of putting an emphasis on gender, today’s women leaders put a relentless emphasis on performance, which naturally has resulted in more women on their teams—for multiple reasons.

“Above all, sales is about results, ability to handle pressure, and to deliver under any market condition,” said Antonia Hock, global head of The Ritz-Carlton Leadership Center. “Sales is beautiful because it is easy to measure talent. Quota achievement and client outcomes are very clear, and that can make for strong evidence against gender bias when women deliver in role.”

When confronted with bias in the boardroom or otherwise, Hock always points to positive business outcomes. “Strong, smart women, and strong, smart men produce results, and the weak attrition out,” she said.

Performance-based culture is a hallmark of successful woman-led sales team. “We work with the numbers and take personal bias out of the equation,” said Frances Moss, co-founder of English Blinds. “The results have been a higher number of women sales leads and reps, which then becomes somewhat self-perpetuating as the working environment is less of a boys club for those seeking to enter the profession.”

Changing the Connotation
That perception (and sometimes reality) of sales as a boys’ club is something that can still hold some women back from pursuing the field, fearing an old-school “used car salesman” approach or an uncomfortable culture fit.

“When I worked in-house, I avoided sales, as the departments were inevitably run by men who were loud, cocky and manipulative. I even witnessed all out fights in the office on more than one occasion!” said Melitta Campbell, who is now a business coach.

She wanted nothing to do with the department until she started to notice that she was actually selling more than her sales-titled peers at events and exhibitions. “While they were pushy, I was curious. I’d ask questions about what the customers were looking for and why,” she said. “With this information, I could share what I believed to be the best options and ask if they agreed, and if not why, so we could find the right solution.”

As a business coach, today she works closely with women to hone their sales skills. “When sales is done well, it’s not called ‘sales.’ It’s called service, support, coaching, giving valuable advice, and going out of your way to help,” she said. Getting women around the negative connotations of the word “sales” itself is a big part in helping her clients to think differently about what the selling process entails and the opportunities that come with it.

Speaking the Right Language
This success can also be replicated in paying closer attention to language in job descriptions to be as inclusive as possible.

“In job descriptions for the sales profile, you’ll come across words like ‘rockstar,’ ‘ninja,’ and ‘hacker,’ which are unsurprisingly not appealing to women,” said Miranda Yun, co-founder of technology company VinPit. She worked instead to avoid using overly masculine words that imply a masculine culture. “This led to a huge shift in job applications which earlier only intrigued male candidates,” she said.

Image matters too. “Most applicants who apply for a position will browse through our website, Glassdoor page, or social media to get a glimpse into our office culture,” said Yun. “That was a chance to disprove the ‘sales culture’ stereotype by featuring pictures of female and male employees working or collaborating together.”

Paving the Way for the Next Generation
This passion and sustained action for changing the culture of sales has been driven by women executives who had to battle stereotypes on their way up the ranks.

“When I very first started in sales, I got all of the attitude and dismissive behavior I expected from the men in the office,” said Moss. “But a couple years later I was running the floor and had over 50 percent women reps in place and we were breaking all kinds of company records. Essentially, I built my career on this, and I have worked to ensure that things are different for women entering sales today than they were for me 20 years ago.”

By making the field more approachable and accessible for the next generation, executives like Moss are smashing the old stereotypes and focusing on who can get the job done, which naturally offers more women a seat at the sales table.

Does Our New Era of Corporate Empathy Bode Well for Women Leaders?