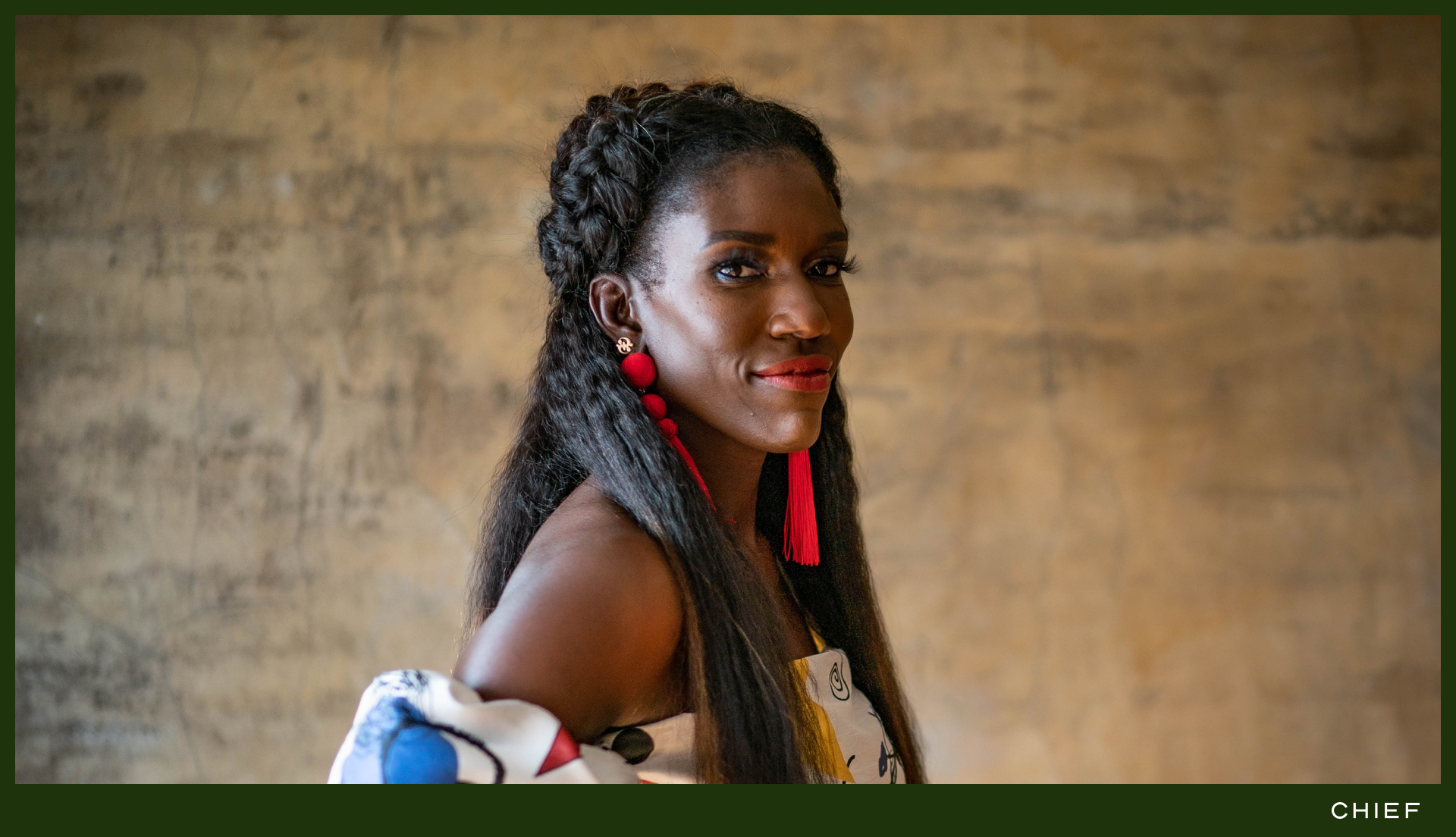 In over two decades as a marketing executive, Bozoma Saint John has left her indelible mark on some of the world's most iconic brands: Pepsi, Apple Music, Uber, and most recently Netflix as its Chief Marketing Officer. Saint John's arrivals — and her departures — always leave a wake of headlines, with the world wanting to know what career move she is going to make next; what's her plan?

In a private conversation with Chief Member Attica Jacques, Head of Global Brand Marketing at Google, Saint John confirms, "Girl, there is no plan."

Her unorthodox, even audacious approach to not only her resume but her marketing strategies has earned her the title of Most Creative People (Fast Company) and World's Most Influential CMO (Forbes). Following the heels of her induction into the 2022 Marketing Hall of Fame by the American Marketing Association of New York, Saint John talks to Chief about the fear and the courage that have propelled her professional journey so far. And yes, she's even answered the question of what she'll do next.

On the Audacity to Not Fit In

"I won't pretend like I'm some sort of fearless warrior out here. Fear plays a big role, I don't deny it at all. Most of the time I use it as somewhat of a fuel to move, because who wants to stay in a place of fear? You don't. So I'm like, okay, let me figure out how to make this more comfortable for me. I'm really trying very hard to ensure that the atmosphere that I am in is comfortable for me. Now, think about the audacity of that, right? We've been told that we have to fit into an environment, a corporate culture… but I have long believed in the sciences about matter. That you change one molecule in a matter and the whole matter changes. So, for me, that's what I think of when I enter a space. I am that molecule. I enter the space and it changes. So then, why would I try to fit into a culture or a corporate space that preceded me. It is no longer the same."

"As a marketer, most of the time what you're supposed to do is create campaigns that hit the masses. It's supposed to hit the middle. You're not supposed to do the little unique thing up here that talks to three people, but I find that to be so interesting. Most of us are pretty open-minded. We want to hear about people's stories, that's why we ask questions when we meet somebody new. We're interested. If you take that same idea to the work that we do, then why wouldn't we be able to put ourselves in the work? I think it makes it richer. I don't think that because I am a single mom, widowed, Black woman in her mid-forties that somebody who is not exactly like me can not identify with me."

On Shirking a Five-Year Plan

"I have a career like this because I have no plan. Because I followed my instinct, because I trusted my destiny, because I went based on the feeling that I had, not based on the math. I stopped doing pro and con lists because I realized that I was either talking myself into a really bad idea or talking myself out of a really good one. That's what happens. We try to rationalize, and sometimes intuition is what's going to drive you. Look, we all have it, and we all know it… We tend to ignore that because it's not based in fact, or what we respect as fact. But I have tested my intuition on enough times that now, I will turn around just because the vibes weren't right; I will not enter a situation just because it doesn't feel right. If we all did that more, we would find more successes. It's not always the paper that tells you that it's the right idea."

On the Fateful Decision to Leave Apple

"There've been very few moves I've made in my career that people championed. When I decided to leave Apple to go to Uber, that was not logic. Nobody told me that was a good idea. Not even my trusted advisors. I was just coming off of the Worldwide Developers Conference, I was presenting Apple Music, there was all this celebration like you're going to do great things at Apple. And I was sitting in my office and looking over at Uber and thinking, Aw hell, maybe there's a bigger purpose. If that company is taken down for challenges to diversity and inclusion and equity in the executive ranks, like who's going to go and do that? I have to go. Sometimes we have to do it. When we think about policies that need to be written or the ways our corporate environments need to change, it's as if we're waiting for a golden handbook to fall into our laps. But no, we have to go; we have to do it. We are the ones that the future is depending on. I've learned to trust my instinct to go and to trust my instinct to leave."

On Why Leaders Need to Promote DEI From Day One

"Even though it is painful and it should not just be our responsibility, we cannot be in these leadership positions and not also contribute. We have to do it, regardless of what it looks like… Let's just all be honest, we get into the role and then we're like, 'Oh, but I don't want to look like I have bias. I need to just keep the waters still, and I'll make the change later.' No, make the change on Day One. You don't know how long the hell you're going to be there. So make the change right now. Be as dynamic right now. Be very overt about what we say, and how we say it, and what we are asking our colleagues to do."

On Who's She's Most Inspired By

"There are a lot of people who inspire me, but I am most inspired by Future Boz, because that bitch is going to be mad at me if I'm not great right now. She's gonna be like, 'What in the hell were you doing?' Seventy-five-year-old Boz is like, 'Get yourself together. You better go after that job, you better make an imprint. You better do the thing that you want to do right now.' So I'm most inspired by her. I want to make her proud. I want her to look back and say, 'Yeah, she was great then, too.' I'm very inspired by the future of self. I'm proud of 25-year-old Boz right now, so I hope 75-year-old Boz is proud of me today."

On Balancing Her Personal and Professional Brands

"Let me just be very clear that sometimes my personal brand has gotten me in some hot water, so I won't pretend as if it's just some easy thing. Not everybody likes my personal brand, but it's like two sides of the same coin. There's no way to get me without all of me. I just find that to be such an odd concept. So I want us all to normalize the fact that we actually are people who are unique, who have different interests, and who can talk about that freely.

Being of a certain age and coming up in a certain generation, we were told early on what we needed to do in order to succeed. It didn't look like this. You weren't supposed to be wearing sequins on a freaking Tuesday afternoon, nobody said that. Or have your nails long, or have the braid — that was not possible in the structure of what it meant to be a senior leader anywhere. When I looked into the future and saw what was coming, I thought, 'Yes, of course I have to make myself into what is expected in order to be promoted, in order to climb that ladder. And it worked somewhat, but it didn't work enough. I was never going to be that other guy — that was not possible."

On the Art of the Pivot

"How do you know if it's time for you to pivot and change? For me, it's when I have hit my ceiling of growth. It's not because the situation was uncomfortable or I don't like somebody or somebody said something wild to me (and that happens all the time), it has been because I have hit my ceiling of growth. It's not like people haven't called me arrogant or selfish because of that belief system. Like Boz is all about herself. Well who the hell should I be about. If it's not about myself who should I be about then? Have I hit it [my ceiling of growth]? Am I doing the same thing over and over and over? Yes, practice makes perfect, but also practice makes dull."

On What She'll Do Next

True to form, she's following her intuition: "I'm just waiting for that chick to talk to me. I'm like, 'Girl, you've got something to say, because look, we've got life to live here.' So I'm waiting for that to unfold."