Arianna Huffington's Top Advice to Executives: 'Get Comfortable With Incompletions' 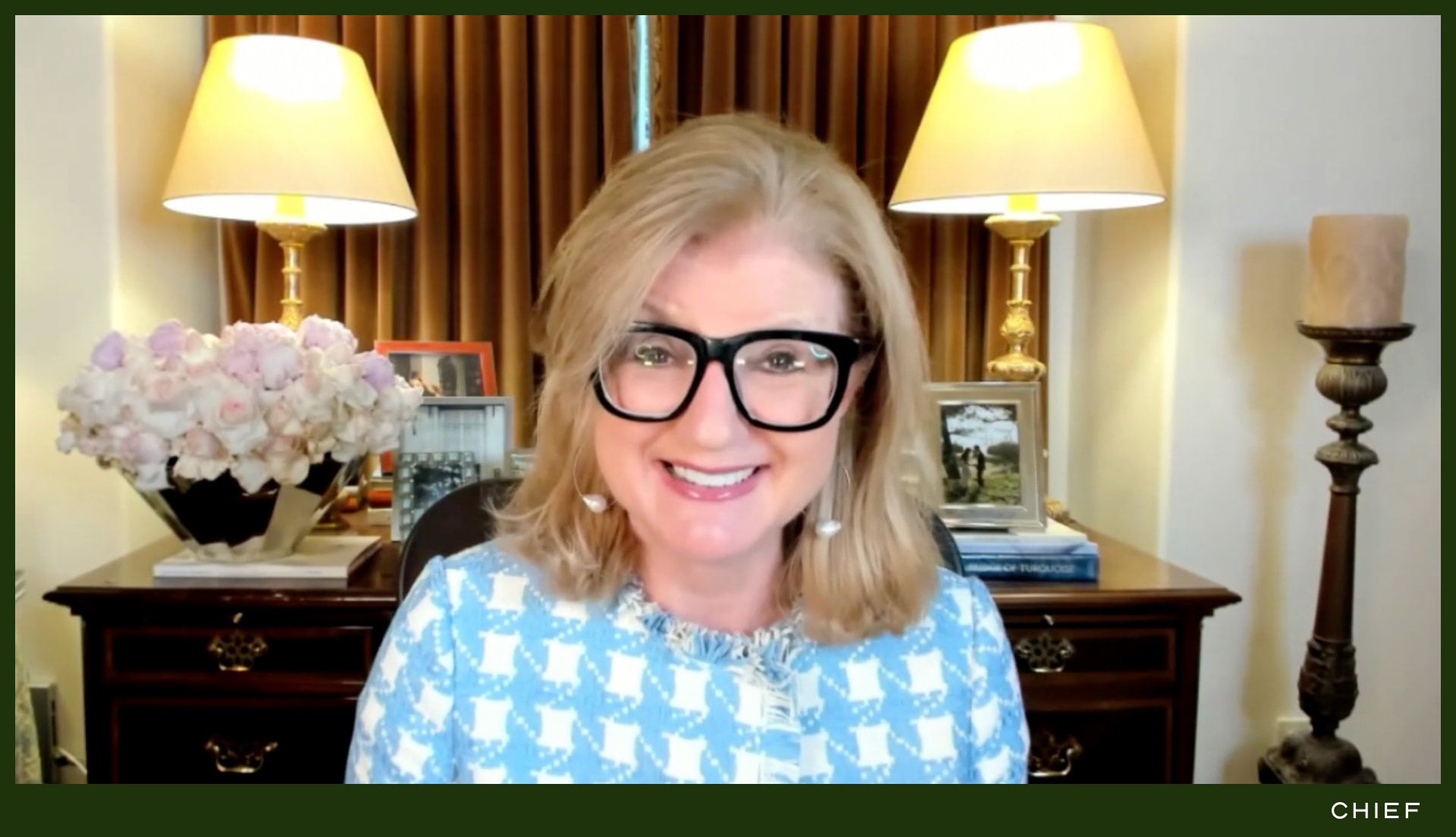 Burnout is one of today’s hottest topics. But for Arianna Huffington, the syndrome that was first officially recognized by the World Health Organization in 2019, has been top-of-mind since she collapsed from burnout 15 years ago. “I literally collapsed, hit my head on my desk, and broke my cheekbone.” The incident inspired nearly a decade of reporting around stress and mental health as founder and CEO of The Huffington Post, before she decided to shift her focus from awareness to action. In 2016, the bestselling author launched Thrive, a behavior-change tech company on a mission to dispel the notion that burnout is an inevitable cost of success

In a members-only conversation, Huffington, who has been named to Time’s 100 Most Influential People list and Forbes’ list of most powerful women, sat down with Chief Member Amber Guild, CEO of Grey New York, to discuss the role leaders can play in combating stress and exhaustion at work. Huffington also offered insights into her personal journey as an executive, board member, and entrepreneur.

On Why Downtime Is a Feature, Not a Bug

“If you think of it for decades, for centuries, we have really believed that downtime is a problem… It really goes back to the first Industrial Revolution, when we began revering machines; we began revering software. The goal with both machines and software is to minimize downtime but, for the human operating system, downtime is not a bug, it's a feature.

“Every leader now needs to be able to navigate turbulent, uncertain waters and be able to look around corners and see the icebergs before they hit the Titanic. Be innovative. Be creative. And these are the first qualities that are depleted when you're exhausted. So, taking care of yourself and taking care of your employees' well-being is not a nice-to-have. We need to say it as a business imperative.”

On Debunking the Delusion to Always Be On

“I had really bought into the collective delusion that so many of us buy into, or used to, that, in order to succeed, we have to always be on, 24/7 — that we don't have the luxury of taking care of ourselves.

“We can't sit here and promise anybody a stress-free existence, unless they want to go chill out under a mango tree. So stress is unavoidable, but cumulative stress is avoidable, and it is cumulative stress that is the problem… The good news is that it takes 60 to 90 seconds to course-correct from stress. Which is kind of amazing, isn't it? So, we've built an entire feature in our platform that addresses that, and it can apply to Chiefs and it can apply to frontline workers.”

On Getting Comfortable With Incompletions

“I've learned to delegate, which I think is essential if you are going to be a leader who doesn't burn out. It requires accepting that maybe it's not going to be done as 100% as you think you're doing it, but that's fine, because it leaves you room to actually zoom out and look at the bigger picture. It's also been very important for me to get comfortable with incompletions at the end of the day. I'm sure there's nobody listening who has an end to their working day. I think all of us could stay up all night answering emails, texts, handling things. We need to declare an end to the working day.

“The phone is not really a phone, it’s a nuclear weapon — repository of every problem and every project, and we need to separate ourselves from it. And yet 72% of people sleep with their phone on their nightstand or cuddled up with them.”

On Changing Corporate Infrastructure From Within

“Right now, the corporate infrastructure that made it so challenging for women is crumbling, and we see a lot more openness to reinventing the infrastructure, because we see that it hasn't been working. There's no question that in the past burnout has disproportionately affected women. Women in highly stressful jobs have higher instances of diabetes, of heart disease, because we are all impacted by stress even more deeply. But that world is changing. It's not changing as fast as we would like it, but women who choose to stay within the current infrastructure and change it are really doing a tremendous service, not just for themselves, but for so many other women and men coming behind them.”

On Joining a Board

“My most high-profile board experience was being on the board of Uber. Once you join a board, you are there for good times and for bad times, and we went through a very turbulent time. I was the only woman on the board. There [were] accusations of sexism in the company, so my role increased because I had to represent the board to the whole company. I learned a tremendous amount.

“Anytime you join a board, I think it's a combination of what you want to learn from an industry, but also what are you passionate about? I was passionate about culture, and I learned a lot about the impact of culture on business metrics, because Uber was phenomenally successful as a business, but a toxic culture derailed it as a business. I would look at what excites you both in terms of the area the company operates in and what your own contribution would be.”

“I love the phase of reinvention. When I decided to leave The Huffington Post to launch Thrive, it was a tough decision because I was leaving a very successful company to follow my passion, to start again. There are no guarantees when you launch a new company, but I felt that this was going to be what was really going to fulfill me.

“So much of our career has to do with climbing the career ladder, getting a higher title, and if these things are no longer fulfilling us and no longer speaking to our soul, then we are really betraying what is true to us, and I think that's happening a lot… There are many examples where people are no longer seeing their lives in terms of the next step on the career ladder, unless that's what fulfills them.”